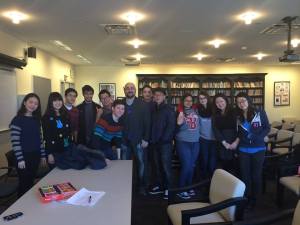 One day after class last year two of my students, Sangmin Jeong and Eunjoo Lee, told me they wanted access to opportunities to improve their fluency as English speakers. The classroom was a space they developed their academic voice; they wanted to learn American slang, vernacular, and culture, to enrich their college experience. A few weeks later we’d created a group that met weekly to address these desires: Foreign And Native Speakers (FANS).
We hoped the group would be split evenly among native English speakers and non-native speakers (NNS), since a group of all NNS wouldn’t have the collective fluency in the English language or American culture that had birthed FANS in the first place. Fortunately, the group has maintained a good balance as its grown.
Every week, the students meet for an hour. Our first semester, we had a core group of 6-8 members. The next semester, we grew to 15-20 students from four continents. This Friday will be our first meeting this year. One of the most appealing aspects of FANS’ growth was an unforeseen one: while NNS have demonstrated and reported greater comfort speaking English, they’ve also exposed the native speakers to the richness and nuances of their native cultures and the dozen or so languages spoken by group members. Not only have the students taught each other, but I’ve learned lessons from FANS that have influenced my lesson planning.
Many students display a level of engagement and showcasing of personality in meetings that isn’t seen in the classroom. I can (and do) tell students ad infinitum the writing classroom is a safe space, a place to get comfortable making errors. I can go over Samuel Beckett’s “Fail Better” mantra and connect it to other practitioners, people in their fields, their majors. I can explain why a willingness to struggle and err will pay off in the class and years after they graduate. But telling them something, however airtight I may think or hope the rationale informing it is, will never register with them as effortlessly or meaningfully as it does when they see it for themselves in a non-pressurized environment. They’re comfortable making mistakes and learning from them with their peers in a way that many of them aren’t in a classroom setting. It’s like watching someone who only sings in the shower at their first karaoke.

During meetings, I sit away from the group and grade papers or work on my own writing. I’m always there but virtually invisible. I don’t want my identity as a professor to contaminate what should as much as possible be a pressure-free, non-academic environ, in contrast to the fluency- and cultural-divides that can affect life in the classroom and on campus.
There are students I never heard laugh until FANS, students who laughed their real laugh there who’d never been that expressive in class. Even though I keep my distance during meetings, I learn things I’d never learn in class. Just by casually listening, I get to know them better. The better I know them, the more effectively I can differentiate lessons and interactions to suit their specific needs.

In one meeting, the students were asking each other how to say certain words or expressions in each other’s mother tongues (Spanish/Korean/Cantonese/Mandarin/ Portuguese/Nigerian/Taiwanese/Senegalese). Seeing students who’d rarely if ever raised a hand in class breezily assume the role of teacher, speaking confidently and seeing the excitement and curiosity of the native speakers in the unfamiliar role of language learners, led me to try a new in-class activity that has received more feedback from students than anything I’ve done.
I split the class into several small groups and gave each group a controversial question to discuss and then tell the class whether they’d reached a consensus or stayed divided. Secretly, I told all the NNS that when I called on them to share their opinion, I wanted them to speak in their native tongue. There are days the classroom hums with electricity. This was one.

Seeing the experience of the students in FANS catalyzed shaping part of a lesson planto ensure native speakers and NNS not view someone learning a 2nd or 3rd language as somehow deficient compared to a monolingual speaker who’s fluent in the dominant local language. However distant that notion may sound to some on the page, it is reality for some. I also wanted the NNS to experience something most native speakers the world over take for granted: seamless real-time interface between your thoughts and your words and the confidence it brings and sometimes renews.
The range in cultures and confidence in the classroom impacts the classroom dynamic. Sometimes math and science majors are not as comfortable with the subjective as a fine arts major. Some students grew up in countries whose education ethos differs from ours. Sometimes the varying levels of fluency mean native speakers, by default, come to dominate the in-class conversation disproportionately, which has the unintended consequence of making it less likely the questions the majority of the class has are ever asked. When we teach research papers, we emphasize blending the sources’ ideas, showing them interacting. A well-written research paper is like a chorus: sopranos, altos, tenors, and basses work together to create something far beyond the sum of their parts. So is the classroom. The more voices that are heard, the more ideas who see the light of day; the more we learn from each other, the greater the heights we all reach.

I gave each group controversial questions because I suspected consensus was unlikely, meaning they’d have to try and persuade each other of a point of view, meaning they’d have to step outside themselves and consider their intended audience. Having the NNSs use their own language ensured everyone in the class would have to step outside themselves, a mindset required when developing an argumentative research paper: when showing how different sources complement one another, one steps outside the cast-a-wide-net approach and considers the matter from a more wide-reaching perspective.
While some students addressed the class in their native languages, others were translating it to others. NNS who’d never volunteered to speak all semester were rapidly, confidently translating what was being said to the native speakers. Some spoke their first language, translated it to English, then returned to their native tongue. One native speaker who’d asked before class if she could leave early for a doctor’s appointment ended up staying the entire time, later saying she’d been too excited by the newness of the experience to go. Ten minutes after class, I exited the building and found a group of NNS still arguing passionately about the issue they’d debated in class. The more invested the student is in their paper, the better it’s likely to end up.

The yin of untold potential and yang of imminent slips are essential for any writer’s evolution. FANS has improved my fluency as a teacher and helped me not only help students understand this truth, but share it with one another.

View all posts by profmmiranda